The Wildlife Society is an international non-profit scientific and educational association dedicated to excellence in wildlife stewardship through science and education. Our mission is to enhance the ability of wildlife professionals and wildlife students to conserve diversity, sustain productivity, and ensure responsible use of wildlife resources and their habitats. The Western Section of The Wildlife Society is comprised of over 1000 wildlife managers, biologists, ecologists, and students from California, Nevada, Hawaii, and Guam all devoted to the sustainable conservation of wildlife in the western United States region. There are 8 geographic Chapters and 7 student Chapters that make up the Western Section.

In order to promote sustainable management of wildlife resources the Western Section hosts numerous workshops for wildlife professionals and students to provide the latest in wildlife techniques and offer specialized training for special status species. Check out all upcoming meetings and workshops on our new events page. In addition the Western Section holds an annual meeting where wildlife professionals, students, and other wildlife enthusiasts share their latest information in the wildlife management field. 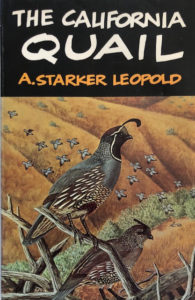 The Western Section of The Wildlife Society (TWS) was established in 1954. Our first president was Starker Leopold. I never met Starker, but his monumental book,

The California Quail, helped inspire me to pursue wildlife biology as a life path. I certainly wasn’t the only one influenced by this book. In fact, TWS recognized its influence by bestowing it with the Wildlife Publication Award. This book is where I learned that concentrated phytoestrogen in subterranean clover, a food plant, functions like birth control in the California Quail during dry years. That’s still one of the coolest examples of an ecological process I know of. It also embodies the premise of Starker’s father Aldo Leopold’s land ethic, namely that “the individual is a member of a community of interdependent parts.”

Our Past President, Rocky Gutiérrez, was one of Starker’s grad students. Rocky reviewed the manuscript for that book and therefore likely helped influence my trajectory. These facts remind me that as wildlife professionals we too are members of a community of interdependent parts. Understanding those parts and where we’ve come from is important for figuring out where we’re going.

Determining where the Western Section is going as an organization is largely the responsibility of the Executive Board. Fifteen years ago, the Board decided a good direction to go would be to increase member services and operations by enacting a full-time Executive Director. It was a great idea. Many tasks previously performed by volunteer Board members were reassigned to the paid Executive Director. Unfortunately, there was no solid plan or clear objectives to guide the Executive Director, and by February 2004, Section funds were depleted, the Executive Director was laid off, and the Section was near insolvency.

What happened? The lack of a solid roadmap was a significant part of the problem. As Yogi Berra said, “If you don’t know where you are going, you’ll end up someplace else.” And, yes, we ended up someplace else. The Board spent much of the rest of the 2000s re-establishing the Section’s financial security and structural stability.

In part to avoid repeating what happened in 2004, the Section embarked on a process in 2013 to develop a strategic plan to guide the Section’s activities over the next five years. Strategic planning is a systematic process of envisioning a desired future. It involves translating that vision into broadly defined goals and objectives and a sequence of steps to achieve them. The outcome of that process was the Section’s 2014-2019 Strategic Plan.

Over the past five years, we’ve accomplished many objectives in that plan. Those include developing the Constant Contact newsletter you’re reading now and solidifying our financial standing, which is the best it’s ever been. The plan served us well, but now it’s time to update it.

In March 2018, the Board met at Grizzly Ranch in the Suisun Marsh to envision and plan our next five years. The main outcome of that meeting was that we narrowed our focus from the original plan’s five broadly defined goals into two goals. As proposed, the goals in our updated strategic plan will be to:

1. Enhance the careers of wildlife professionals, and

2. Be an active voice for science.

Having just two main goals will give us a clearer sense of purpose and will drive our engagement with the public. The other main goals were not abandoned. Instead, they became partly operationalized and partly subsumed under these two goals.

Over the coming months, Rocky Gutiérrez and I will revise the written plan in accordance with the Board’s direction. When adopted, the revised plan will provide the guidance necessary to continue offering more professional development opportunities and promoting science-based decision making in a manner that is financially responsible and sustainable.

As always, the direction of the Western Section is what you desire. We welcome your suggestions not only relative to these two main themes of the updated strategic plan but also any you might have about the future activities of the Western Section. Please feel free to contact either me or Rocky with your ideas.