The following awards were presented at the TWS-WS Members’ Forum on Thursday February 10, 2022, by TWS-WS President Dan Airola.

Bob Nelson 1933-2021.  Bob was a US Navy veteran and spent 35 years with the USFS. Bob was an unflashy, quiet person and a listener, and was easily approachable even for a young biologist.  He also, however, was a very determined, visionary, and skillful leader.  He oversaw dramatic hiring and expansion of Wildlife and Fisheries programs in the Forest Service within the California Region and then nationwide. He was the first recipient of the Lloyd W. Swift Award in 2000, “for a lifetime of leadership commitment and dedication to the wildlife and fisheries resources of the United States.”  Bob also received the prestigious Aldo Leopold Award from The Wildlife Society in 1996.

Geoff Monk 1954-2021.  Geoff had a very long career as a wildlife biologist and environmental consultant and had been a TWS-WS member since 1992. Geoff also w worked for the Bureau of Land Management, The U.S. Fish and Wildlife Service, and at UC Santa Cruz as a full-time researcher in the Predatory Bird Research Group. He was a renowned ornithologist and was a key player in the history of peregrines in California starting in 1978. He was also instrumental in the founding of the Golden Gate Raptor Observatory.

Chapter of the Year Award 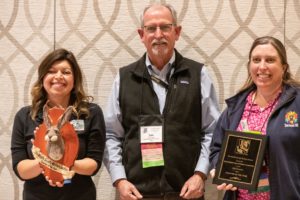 Congratulations to the 2022 Chapter of the Year, the Southern California Chapter. The Chapter had a busy year even with the ongoing pandemic. They provided funding for 6 students to attend the 2021 virtual Annual Meeting and were prepared to award several recipients registration + travel costs to the 2022 Annual Meeting. Every other month they held a Third Thursday “Talk” consisting of a presentation on a topic, usually focusing on a particular ecosystem or sensitive species of southern California including vernal pools, western pond turtle, marine biology of SoCal, coastal cactus wren and coastal California gnatcatcher, restoration of a desert seep, and new recovery actions for California red-legged frog. Each talk presenter was known as a subject matter expert for their topic. Their Conservation Affairs Committee participated in a virtual meeting with House of Rep Sara Jacobs office, attended three (3) 30×30 regional workshops, and submitted a comment letter opposing new MBTA rule.

Conservationist of the Year Award 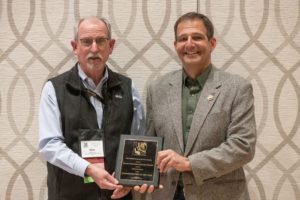 The Conservationist of the Year Award went to Ducks Unlimited-Western Region. Since incorporating in 1937, Ducks Unlimited (DU) has conserved more than 14 million acres of wetland habitat in the United States, Canada, and Mexico. DU’s Western Region, is composed of forty-nine conservation staff who work in the states of Alaska, Arizona, California, Hawaii, Idaho, Nevada, Oregon, Utah, and Washington. Often working remotely and/or in environmentally sensitive areas, the conservation staff at Ducks Unlimited has a long history of successfully coordinating and managing habitat projects. Their conservation program is based on conceptualizing, designing, implementing, and monitoring habitat restoration and enhancement projects while operating in a collaborative, streamlined, and efficient manner that maximizes limited resources. 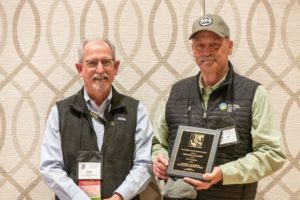 The “Barrett A. Garrison Outstanding Mentor Award” was bestowed to Wendell Gilgert. Wendell had a distinguished 34-year career with the USDA-Natural Resources Conservation Service, which included 6 years mentoring students as an adjunct professor at Colorado State University. He was devoted to developing young ecologists with broad knowledge and excellent interpersonal abilities, mentoring numerous biologists working in California from Humboldt and Modoc to Tulare counties. In additions to these biologists, he has also shown a strong commitment to inspiring, mentoring, and educating farmers, ranchers, conservationists, and agricultural professionals, both young and old.

James D. Yoakum Award for Outstanding Service and Commitment to The Western Section of The Wildlife Society 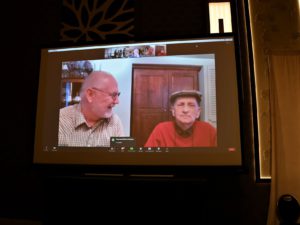 Dr. Marshall White and Dr. Reginald H. Barrett were the recipient of this year’s James Yoakum Award for Outstanding Service. Dr. White and Dr. Barrett are highly deserving of the Yoakum Award.  Their “long-term service, support, and commitment to the Western Section” is unmatched among current Section members.  Dr. White has over 50 years of active membership and support in the Western Section, was the TWS-WS Secretary/Treasurer in 1970, TWS-WS President in 1972, and have been a financial advisor for over 20 years. He received the TWS Distinguished Service Award in 2012. Dr Barrett has been an active TWS-WS member for almost 50 yrs. He has held numerous TWS-Ws Board positions including Chapter Representative (1981, 1982, 1986, 1987, 1988), TWS-WS President Elect (1996), and TWS-WS President (1997). He received the TWS-WS Dasmann award in 1989 and the TWS Distinguished Service Award in 2019.

In addition to the specific roles listed above, Dr. White and Dr. Barrett have been a consistent presence at nearly every TWS-WS Annual Meeting/Conference for nearly 50 years.  This includes being active contributors to the often-avoided, yet critically important, Annual Members/Business meeting where their historical perspective and thoughtful guidance during these meetings help ensure TWS-WS programs and operations are conducted in the best interests of TWS-WS. Finally, Dr. White and Dr. Barrett were contemporaries and close friends with Jim Yoakum and has special meaning for both. 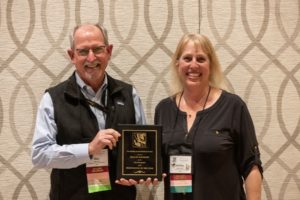 The Dasmann Award was presented to Dr. Kelley Stewart for her outstanding contribution to wildlife resources management and understanding in California, Nevada, Hawaii, or Guam.  Kelley has established herself as a leading researcher in the ecology, conservation, and management of large mammals in the Great Basin, other ecosystems in Nevada and in broader regions of the American West. She has maintained high standards throughout her career, both in her own research and that of her students and has taken on a number of issues of direct importance to managers and decision makers in Nevada. Kelley’s efforts have been recognized twice by the College of Agriculture, Biotechnology and Natural Resources (CABNR) at the University of Nevada Reno as she was the CABNR Teacher of the Year in 2012 and Researcher of the Year in 2021 and is a highly valued member of the faculty at the University of Nevada Reno. In addition, she was recognized for her work by being honored as a Fellow of The Wildlife Society (2019) and she is currently serves as the TWS-WS Section Representative to the Governing Council of the Wildlife Society.

The following TWS-WS member received a past-president’s pin for service to the Western Section:

The following TWS-WS members received plaques for their service to the Western Section: